Who You Don’t Want to be We all know these characters, we generally turn an move as quickly as we can in the opposite direction rather than being confronted with them. We’re too polite to point out how uncomfortable they make us feel.
?? 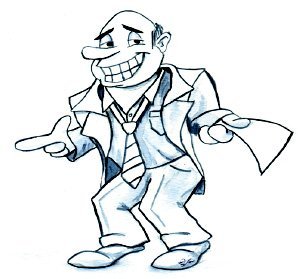 Sammy Sleaze is a character I created several years ago to personify individuals who try to sell someone on their concept or product at an event, drink too much, tell jokes that might offend an attendee, talk about religion or politics, or complain about the event.

Every time Sammy meets someone, he’s looking all around trying to spot someone else he wants to talk with. His attention is always diverted elsewhere, and his eyes dart all around the room like a crazed lunatic. More often than not, when Sammy finds someone who will listen, he pulls out his brochure and attempts to read it word-for-word to his unfortunate captive audience.

After observing several unsuspecting Sammy Sleazes, I decided to take a risk. I approached Sammy and handed him a business card. He looked at it and said, “You’re not Brad Warren!”

Get Your Entrepreneur Guide